Obsessive-compulsive disorder (OCD) is an anxiety disorder in which people have recurring, unwanted thoughts, ideas or sensations (obsessions) that make them feel driven to do something repetitively (compulsions). The repetitive behaviors, such as hand washing, checking on things or cleaning, can significantly interfere with a person’s daily activities and social interactions.

Obsessions are recurrent and persistent thoughts, impulses, or images that cause distressing emotions such as anxiety or disgust. Many people with OCD recognize that the thoughts, impulses, or images are a product of their mind and are excessive or unreasonable. Yet these intrusive thoughts cannot be settled by logic or reasoning. Most people with OCD try to ignore or suppress such obsessions or offset them with some other thought or action. Typical obsessions include excessive concerns about contamination or harm, the need for symmetry or exactness, or forbidden sexual or religious thoughts.

Obsessive thoughts can include:

Compulsions are repetitive behaviors or mental acts that a person feels driven to perform in response to an obsession. The behaviors are aimed at preventing or reducing distress or a feared situation. In the most severe cases, a constant repetition of rituals may fill the day, making a normal routine impossible. Compounding the anguish these rituals cause is the knowledge that the compulsions are irrational. Although the compulsion may bring some relief to the worry, the obsession returns and the cycle repeats over and over.

Some examples of compulsions: 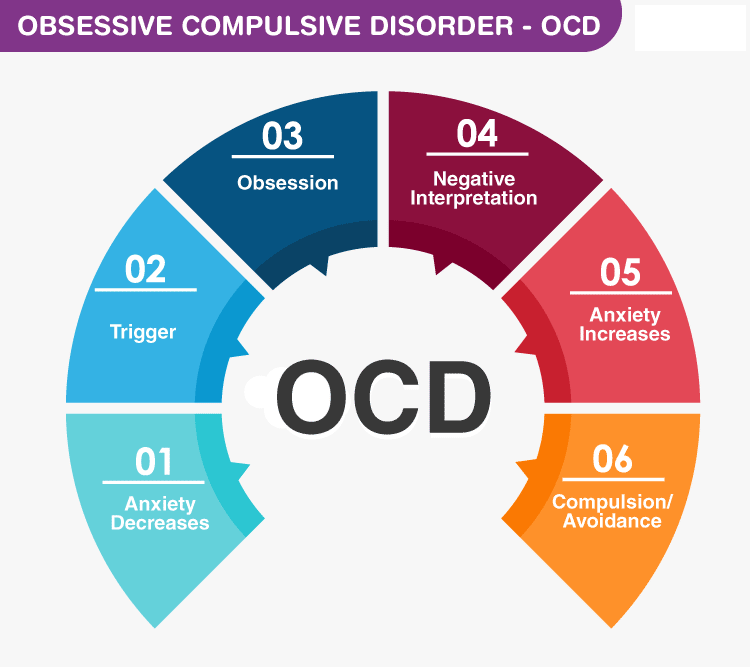